Examples and Non-Examples:
Examples:
Jim Thorpe may have been the greatest athlete of all time.
Jim Thorpe was an outstanding athlete in many sports.

Each supporting detail needs to provide support or explanation for the central idea. 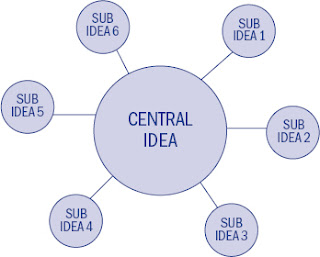 With Central Idea, we call the sub-ideas and evidence supporting details. 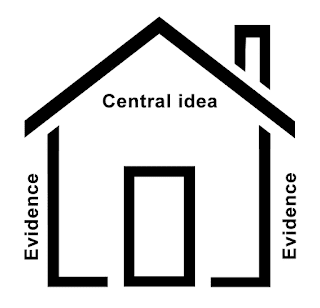 More examples of central ideas from nonfiction books:
One of the core aspects of the race to build the atomic bomb was spying on one another.

Scientists have developed many new and useful genetic engineering technologies. These genetic engineering technology are a great way to fix genetic diseases, to prevent harmful bacteria or viruses from affecting us, and to help agriculture by creating plants that can survive in harsh conditions. However, with every good there are many potential risks that must be considered.
To start, there are many advantages of genetic engineering in both the agriculture and medical fields. Some examples include resistant crops and therapy to help fight diseases. In the agriculture field seeds can be genetically engineered. [The quotes are missing introductions, but are correctly cited at the ends of the sentences.] "Engineered seeds are resistant to pests and can survive in relatively harsh conditions" (BiologyWise). This means that genetically engineered plant seeds grow stronger plants that survive in areas normal seeds don't survive. By having these new seeds, the plants bring more yield, giving us more food to sustain the population of Earth. Similarly, genetic engineering has benefits in the medical field. For example, "Gene therapy just saved a young boy's life-by giving him new skin" (Maldareeli). Gene therapy through genetic engineering can help, and has helped, people with various diseases. Diseases that in the past killed with no way for medical personnel to fight back now have a way to stop deaths from these diseases. (What is wrong with this last sentence?)


However, there are drawbacks in both fields that must be considered. A few of these drawbacks include genetic defects and harmful pathogens. "Genetic therapy in human beings can have certain side effects. For example, while treating one defect the therapy may lead to another" (BiologyWise). No matter how much of the original problem is fixed there is a risk that gene therapy may lead to a new disorder. This could lead to expensive medical bills, sickness, and possibly death. Similarly, there are potential risks to genetic engineering in the agricultural field. For example, "Horizontal gene transfer can give rise to new pathogens" (BiologyWise). A pathogen is a type of virus that can cause disease. New pathogens kill crops, lessening the yield produced. [Adding examples would improve  this.]
In summary, there are many risks and rewards to genetic engineering. In the medical field, a disease may be cured, but as a result a new disease may rise after using genetic engineering to try to fix the original problem. Similarly, in the agriculture field, new plants may be more resistant in the natural climate, but a new pathogen may form negating the benefit of the genetic engineering. Based on this evidence genetic engineering has the potential to help in many ways, but there are serious risks that must be considered before moving forward with genetic engineering technology.
Posted by Ms. D. at 1:25 PM