Night At the Museum 2 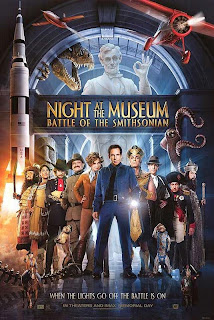 This movie is fun and funny as it is, but a little background knowledge (also called schema) could it make it even better. If you're going, see if you already know about these people, creatures, art, and events from history: 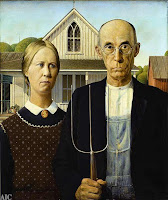 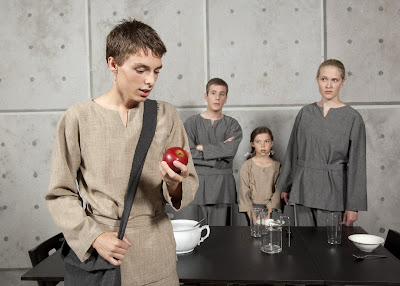 The Giver, Dramatized
BYU is presenting a play based on the YA novel, The Giver. My daughter and I went to see it today. First we went to a free "brown bag" workshop, preparing to see the play. That was fun. Then (after we had finished eating lunch) we went to our front row seats (we just bought the tickets today) for the play. Barta Heiner plays the old Giver. She is a marvelous and well-respected actress. Jonas is played by a sophomore from Orem High School; his parents by BYU students; Lily by a fourth grader from Springville; Asher, Fiona, and Rosemary by middle school students (7th, 8th, and 6th graders). All do a fine job.

If you get to go, notice how set design portrays the community, and the transfer of memories is shown.

Watch for similarities to and differences from the novel, and notice how the playwright sometimes worked in information without using a whole scene from the book.

I wish I could have take all my seventh graders to see this play.

Labels: a play, The Giver

In seventh grade English, we learn about elements of literature, including theme, topic, plot, conflict, character, setting, and point of view.

Here are some examples from The Candy Shop Wars:

Theme (There are several.): "If doing something feels wrong, it probably is wrong." This theme is shown when Mrs. White asks the kids to do things that they feel are wrong even though she seems to have good reasons to do them, and even though she offers them tempting rewards for doing them.

Plot: The plot is what happens in the story. I won't tell you the plot because that would spoil reading it, though I might take time later on to tell you part of the plot.

Conflict: There is man vs. man conflict. One example is the bullies against the main characters.
There is also man vs. the unknown since the kids have to fight against characters with magical powers. Another conflict is man vs. self when the kids have to make choices between what they are tempted to do and what they feel is the right thing to do. 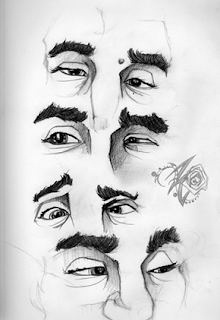 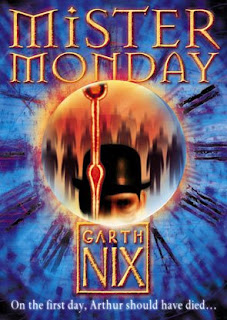 Have you seen the Cadbury eyebrow commercial?

If your parents will let you use youtube, go to http://www.youtube.com/watch?v=TVblWq3tDwY to watch this commercial.

I'm making a text-to-text connection between these lively eyebrows and an eyebrow that comes to life in one of Garth Nix's Keys to the Kingdom books.

In Nix's book, there is an eyebrow that comes to life and becomes a character in the book. Weird? I know. A couple of years ago I was at a conference where Garth Nix spoke and answered questions. I asked him where the idea came from for the eyebrow that came to life. Most of the people in the room looked at me as if they'd never heard of such a thing! However, for me and my daughter, that had had been one of our favorite parts of the book.

He said one day he noticed a man with very bushy eyebrows and could imagine one of those eyebrows stepping off that man's face and taking on a personality of its own. Yes, weird, but what a fun idea! You really should try out that series.

I can't remember if the eyebrow is in the first, or in a later book, but it does work best to start with Mister Monday.

Look for these books:
The Keys to the Kingdom series, starting with Mister Monday.

If you'd like smaller, easier (but still exciting and well-written) books, look for his Seventh Tower series (two out so far), starting with The Fall.

My favorite Garth Nix series is the Abhorsen (The Old Kingdom) Trilogy, starting with Sabriel.

To learn more about Garth Nix, go to his official site at http://www.garthnix.co.uk/
Posted by Ms. D. at 5:45 AM