Son by Lois Lowry -- young adult science fiction/distopian fiction -- the fourth book among The Giver books
Green Shadows, White Whale by Ray Bradbury --adult  autobiographical novel -- Bradbuy tells about the time he spend in Ireland in the 1950s, writing a screenplay for Moby Dick.
The Long Walk -- adult nonfiction  -- escape from a Soviet prison camp in 1941.  The seven men walk across Siberia, China, and over the Himalayas to attempt to reach freedom.  I did not finish this one.  I abandoned it because I had other books I'd rather read.
The Haunted Looking Glass by Edward Gorey -- ghost stories by famous authors selected and illustrated by Mr. Gorey
The Key of Kilenya  by Andrea Pearson -- fantasy by a local author. 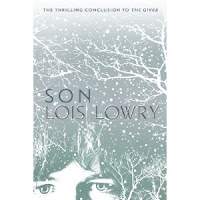