Extra Credit: Nothing in Heaven Functions As It Ought

Up to 15 points are available for learning this poem.
What does this poem have in common with the novel The Giver? 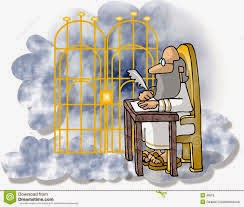 Nothing in Heaven Functions As It Ought

Nothing in Heaven functions as it ought:
Peter's bifocals, blindly sat on, crack;
His gates lurch wide with the cackle of a cock,
Not turn with a hush of gold as Milton had thought;
Gangs of the slaughtered innocents keep huffing
The nimbus off the Venerable Bede
Like that of an old dandelion gone to seed;
And the beatific choir keep breaking up, coughing.

But Hell, sleek Hell hath no freewheeling part:
None takes his own sweet time,
none quickens pace.
Ask anyone, How come you here, poor heart?--
And he will slot a quarter through his face,
You'll hear an instant click, a tear will start
Imprinted with an abstract of his case. 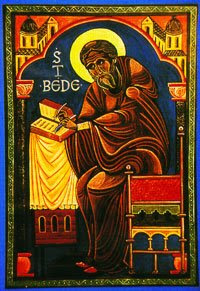 Illustrations:
Saint Peter at the Pearly Gates
slots for coins
The Venerable Bede -- shown with a nimbus (a halo)
cherubs -- who could be some of the "slaughtered innocents" -- the babies who were killed by Herod in his attempt to get rid of the one who the Wise Men told him would be the new king (Jesus).

Vocabulary:
Peter -- Saint Peter, an apostle of Jesus Christ;
traditionally, the keeper of the gates of heaven.

Bifocals – eyeglasses, having two portions, one for near and one for far vision.

His gates – The gates of heaven, the Pearly Gates

Nimbus -- a shining cloud sometimes surrounding a deity when on earth.

Venerable: commanding respect because of great age or impressive dignity -- The suffix “-able” turns a word into an adjective, and means “capable of.”

Abstract: a summary of a text, scientific article, document, speech, etc.
Posted by Ms. D. at 12:12 AM